John Hope Bryant is an entrepreneur, author, advisor and one of the nation’s most recognized empowerment leaders. He is the founder, chairman and CEO of Operation Hope and the Bryant Group Companies and The Promise Homes Company, the largest for-profit minority-controlled owners of institutional-quality, single-family residential rental homes in the United States. He is also one of the top-selling African-American business authors in America. Along with Crown Prince Haakon of Norway and Professor Pekka Himanen of Finland, Bryant is also a co-founder of Global Dignity. Global Dignity is affiliated with the Forum of Young Global Leaders and the World Economic Forum.

In his new book, The Memo, Bryant argues that true power in this world comes from economic independence, but too many people don’t have enough money left at the end of the month. His message is simple: The supermajority of people who live in poverty, whom Bryant calls the invisible class, as well as millions in the struggling middle class, haven’t gotten “the memo”—until now. Come for an engaging discussion on achieving financial literacy and approaching wealth with a completely new attitude … and about how the path to liberation is hiding in plain sight.

Special thanks to Bank of the West for their support of programming and commitment to community.

President and CEO, Bank of the West—Moderator 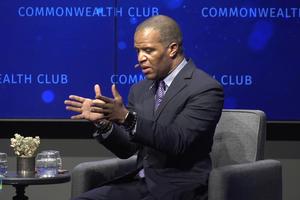