Twenty-seven-year-old Michael Tubbs has already made history as both Stockton’s first African-American mayor and as the youngest mayor in American history of a city of more than 100,000 people—and he’s just getting started.

He recently made headlines when Stockton became the first city in the nation to pilot a universal basic income program. Tubbs also hopes to use his tenure to reduce violent crime, foster economic development and partner with local school districts to improve public education.

Tubbs’ bold leadership and commitment to his community have earned him recognition as one of Forbes’ 30 Under 30 young stars for 2017, and The Root named him one of their 100 most influential African-Americans in 2017.

As a member of the Stockton City Council, Tubbs founded the Reinvent South Stockton Coalition and played an instrumental role in the planning efforts of the South Stockton Promise Zone. He also served as a college course instructor for Aspire Langston Hughes Academy and as a fellow and lecturer at the design school at Stanford University.

Tubbs was born and raised in Stockton to a teenage mother and an incarcerated father. He graduated with honors from Stanford University. During his time as a student, Tubbs founded both the Phoenix Scholars and the Summer Success and Leadership Academy at the University of the Pacific, both of which aim to increase access to higher education for underrepresented students. Tubbs also interned in the White House and at Google. 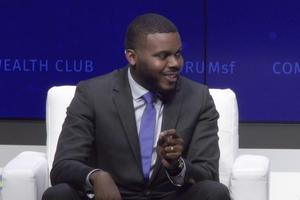