Some pundits and politicians imply that investments from China are somehow not aboveboard and are detrimental to the U.S. economy. Even though Wanxiang America has been investing in and acquiring U.S. companies since 1994, most of the American public has likely never heard of the company. Much of Wanxiang’s focus is in the automotive components sector, and their annual revenue has topped $4 billion. Join us for a discussion of Wanxiang, a company that serves as a case study, shedding light on the pros and cons of China's investments in the United States.

Yukon Huang, a renowned economist, former country director for China at World Bank and author of the new book, Cracking the China Conundrum: Why Conventional Economic Wisdom Is Wrong, will further clarify and explain common misconceptions about China’s investments in the United States.

Moderator George Koo is a retired China business consultant and contributor to Asia Times. He has served as a board member of the only three-party, Sino-American-Nippon joint venture in automotive components in China. 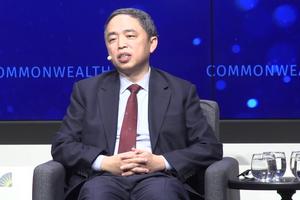