Donna Brazile: The Hacking of an American Election

In July 2016, just four months before Donald Trump’s stunning victory, the Democratic Party was in shambles. Its computer systems had been infiltrated by a mysterious and seemingly unstoppable hacker. Leaked emails suggested that ousted former party leader Debbie Wasserman Schultz and several of her top aides had machinated behind the scenes to tip the scales during the primary in favor of Hillary Clinton. Bitter internal rivalries and power struggles had ground Democratic staffers’ work to a near halt, all while Republicans leveled broadside after broadside against “Crooked Hillary” and her progressive agenda.

In desperation, the Democrats turned to the only person they could trust to stabilize their flailing operation: veteran political strategist Donna Brazile, who shepherded the Democrats through one of the most turbulent general elections in history. During her time at the helm of the Democratic National Committee, Brazile weathered some of the most difficult challenges of any party leader in American history—from bomb threats called in to Democratic headquarters to cyberattacks suspected to be orchestrated by Russian intelligence to a brutal personal Twitter feud with Donald Trump.

Now, Brazile is speaking out about her time as the leader of the Democratic Party. Join her for an unfiltered conversation about the 2016 election and the chaotic battlefield of American politics.

Donna Brazile
Former Chair, Democratic National Committee; Author, Hacks: The Inside Story of the Break-ins and Breakdowns That Put Donald Trump in the White House 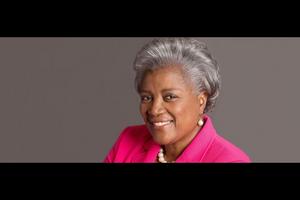 DONNA BRAZILE: THE HACKING OF AN AMERICAN ELECTION