Back to School: What Is the Purpose of Public Education?

Across the country, the challenges of growing extremism, xenophobia, violence and filter bubbles, alongside a lack of mutual understanding and collective responsibility, plague communities and the country at large. Can public education be a part of the solution, or will it crumble in today’s political climate?

Over the last 30 years, education reform has drastically changed American schools: The slashing of public dollars, the backlash against racial integration, test-and-punish policies, and other shifts have increased inequities and caused other divisions within our public school system. In just the past decade, the per-student funding gap between rich and poor schools has grown 44 percent, and public schools are more segregated by race and class today than they were shortly after the landmark Brown v. Board of Education Supreme Court decision. The Trump administration heralds school choice and vouchers as the best solution to issues facing education, but access to and the quality of these systems are hotly debated.

This leaves the American public with lots of questions: Can the promise of public education stand up to the current state of the country? Are there ways to uphold public schools as a bastion of democracy, civic engagement and inclusion? How can parents and citizens help revive the promise of public education? How can choice policies improve to serve disabled students, black children and English learners more equitably?

Join Nikole Hannah-Jones, New York Times Magazine journalist, and Kristina Rizga, Mother Jones reporter and author of Mission High, as they reflect on their extensive reporting in schools—as well as their personal experiences. As they look ahead to the future of schools in America, Hannah-Jones and Rizga will highlight the key, largely invisible forces that are slowly eroding the promise of public education and the intentions and money that drive some of these promises. 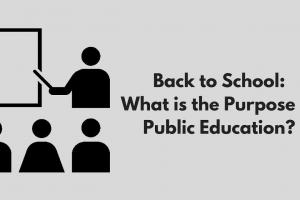 Back to School: What Is the Purpose of Public Education?