Protect the Vote, with Jason Kander

Voting in America has never been easy, and Jason Kander has made it his personal and political mission to change that.

Recently, Kander launched Let America Vote, a political organization dedicated to leading the fight for voting rights. Specifically, Let America Vote focuses on combating state and national laws that it believes are intended to disproportionately disenfranchise people based on their race, ethnicity, gender, age or income. The organization ensures that there are political consequences for elected officials who defend prohibitive voting laws.

Kander was elected Missouri secretary of state in 2012 at the age of 31, making him the first millennial in the nation to be elected to statewide office. He became interested in public service after he returned from a tour of duty as an Army intelligence officer in Afghanistan and recognized the need for more resources for America’s veterans and their families. After serving in the Missouri House and narrowly losing his 2016 bid for U.S. Senate in Missouri in the state’s most expensive Senate race in history, he gained traction on the national political stage as a promising up-and-comer for the Democratic Party.

Kander will be in conversation with California Secretary of State Alex Padilla, a rising star in California’s political scene, who previously served in the California State Senate and who was the youngest person and the first Latino elected president of Los Angeles City Council. During his tenure as secretary of state, Padilla has expanded access to voter registration for California’s 16-, 17-year-olds and is currently working to improve California’s voter tools and technology.

Join INFORUM, Kander and Secretary Padilla for a conversation about the vital role of civic engagement in our democracy and the need to ensure that all eligible citizens are able to exercise their constitutional right to cast their ballot. 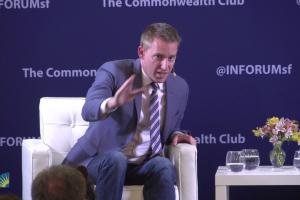 Protect the Vote, with Jason Kander