The Sky Event of the Decade: The “All-American” Eclipse of the Sun on August 21

Courtesy of Google, everyone attending this talk will receive a free pair of certified eclipse glasses, which can be used to safely view the solar eclipse.

On Monday, August 21, 2017, an eclipse of the sun will be visible throughout the U.S. and all of North America. People in a narrow path from Oregon to South Carolina will see a spectacular total eclipse, the first in the continental U.S. in 38 years. The moon will briefly cover the sun completely, and day will turn into night. Everyone else (an estimated 500 million people, including those in the Bay Area) will see a partial eclipse, where the moon covers a good portion of the sun. Special glasses or viewing techniques are needed to look at the sun safely during a partial eclipse. (Sunglasses are not enough.)

Astronomer Andrew Fraknoi will describe how eclipses work, why they are one of nature’s most spectacular sights, exactly when and where the eclipse of 2017 will be visible, and how to observe the eclipse of the sun safely. He’ll also cover historic discoveries made during eclipses, citizen science projects planned for the 2017 eclipse, and concerns about gridlock and lack of public services in the eclipse’s path. Fraknoi is co-leader of a project that will distribute 2 million eclipse glasses (and eclipse information) through public libraries in the U.S.

Fraknoi serves on the 2017 Eclipse Task Force of the American Astronomical Society and has been training teachers and librarians to act as guides for the public as the August eclipse approaches. The International Astronomical Union has named Asteroid 4859 after Fraknoi in honor of his contributions to the public understanding of science. Following his retirement from Foothill College this summer, he will teach noncredit courses for adults at San Francisco State and the University of San Francisco. He is also the co-author of a new children’s book about eclipses, When the Sun Goes Dark. 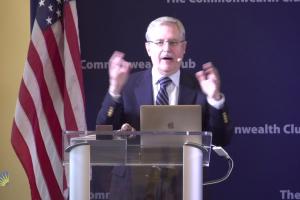 THE SKY EVENT OF THE DECADE: THE “ALL-AMERICAN” ECLIPSE OF THE SUN ON AUGUST 21