A broadcast journalist for more than four decades, Bill Moyers had been recognized as one of the unique voices of our times, with more than 30 Emmys and many other distinguished awards. Yet Moyers says Rikers: An American Jail is the most important film that he has ever worked on. Mass incarceration in America, with over 2.2 million people packed into its jails and prisons, is the human rights crisis of our time. To understand the human toll of imprisonment, Moyers believes Rikers Island is a good place to start. One leader in criminal justice reform said, “Rikers is every jail, and every jail is Rikers.”

Rikers: An American Jail brings us face to face with men and women who have endured incarceration at Rikers Island. Their stories, told direct to camera, vividly describe the cruel arc of the Rikers experience—from the shock of entry to the extortion and control exercised by other inmates, the oppressive interaction with corrections officers, the beatings and stabbings, the torture of solitary confinement, and the many challenges of returning to the outside world. Moyers joins John Boland, Lenore Anderson and LaDoris Cordell to reflect on what factors have brought America to this human rights crisis, discussing the political climate for criminal justice reform and the importance of confronting what is being done in our name, with our tax dollars, purportedly for our safety. Join us for this important program that transcends Rikers and brings up issues that impact all Americans.

In association with KQED

All paid tickets include a box lunch.

Participants must register by noon on Wednesday, May 17.

The film Rikers: An American Jail contains some explicit language.

Founder and Executive Director, Californians for Safety and Justice 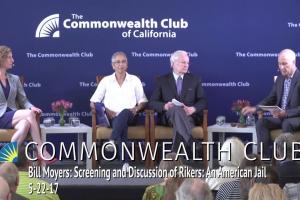