Sam Altman, 31, has been one of Silicon Valley’s brightest stars for years as a founder, investor and president of Y Combinator. But, more recently, Sam and Y Combinator have both been making headlines for their involvement in some of today’s most contentious political and social issues.

Y Combinator’s new "basic income project," based in Oakland, will give 100 families a minimum wage with the goal of exploring alternatives to the existing social safety net. Sam has also been an outspoken critic of the Trump administration and has backed "track Trump," an online tool that monitors the promises President Trump delivers on, and those on which he comes up short. Y Combinator also recently welcomed the ACLU into their winter 2017 class and will help the ACLU turn its recent $24 million donation haul into concrete actions and organizational growth. Finally, Sam is in the beginning stages of a new project focused on finding a way to reduce housing costs through the creation of a smart city prototype.

Sam was named president of Y Combinator, Silicon Valley’s largest startup incubator, in 2014. Y Combinator’s portfolio includes heavyweights, such as Airbnb, Dropbox and Stripe. Sam began his tech career as CEO of Loopt, which was acquired in 2012 and was included in Y Combinator’s first round of funded companies in 2005. Sam is also a personal investor in several of today’s most successful startups, including Airbnb, Stripe, Reddit, Asana and Pinterest.

Join INFORUM, Sam and moderator Nellie Bowles of Vice for an insightful and timely conversation about tech, politics and everything in between. 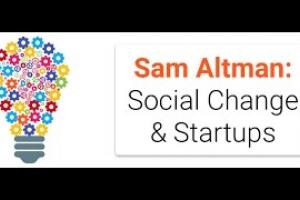