Journalist T.R. Reid: How to Clean Up the U.S. Tax System

On the eve of the annual tax deadline, here’s a program that promises to provide ammunition for the next time you complain to elected officials about the hassles and inequities of the U.S. tax system.

Noted journalist T.R. Reid points out the following: Last year, Americans spent over 6 billion hours and 12 billion dollars filing their taxes. In the Netherlands, the average filing time is 15 minutes; in Estonia, it takes 7 minutes. According to Reid, Congress has given its members various tax breaks and deductions that other Americans never receive. In Slovakia, by contrast, government representatives pay 5 percent more in tax. Reid goes on to say that U.S. billionaires can pay relatively very little tax—and sometimes no tax at all. France, Norway and Switzerland all have wealth taxes designed to reduce economic inequality.

Historically, there have been total rewrites of the U.S. tax code every 32 years—in 1922, 1954 and 1986. This means the next rewrite is due in 2018, and Congress and President Trump will need to begin revamping the code this year. Can they write a new tax code that is both fair and simple? Can they cut tax rates and still bring in the revenue required? According to Reid, this can be done. In this program, he’ll detail exactly how America can rewrite the tax code, in this case learning from other democracies around the world. 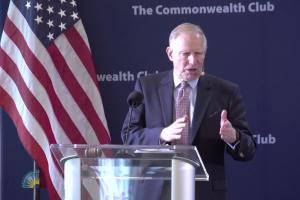 Journalist T.R. Reid: How to Clean up the U.S. Tax System