George Shultz has had a distinguished career in government, academia and the world of business. He is one of two individuals who have held four different federal cabinet posts; he has also taught at three of this country’s great universities. In 1989 he was awarded the Presidential Medal of Freedom, the nation’s highest civilian honor. Come hear Secretary Shultz’s seasoned observations on foreign policy, economics and on what makes great presidential leadership, especially as the Trump Administration's policies begin to take shape.

In conversation with Dr. Gloria Duffy 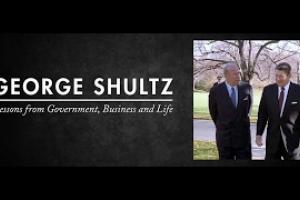