KQED’s Michael Krasny: Oy, Does He Have Jokes for You

Michael Krasny has been telling Jewish jokes since his bar mitvah, and it’s been said that he knows more of them than anyone on the planet. He has now put together a compendium of Jewish jokes that packs the punches with hilarious riff after riff and also offers a window into Jewish culture. Let There Be Laughter borrows from traditional humor and such Jewish comedy legends and new voices as Jackie Mason, Mel Brooks, Joan Rivers, Larry David, Sarah Silverman, Jerry Seinfeld and Amy Schumer. With his background as a scholar and public radio host, Krasny also delves deeply into the themes, topics and form of Jewish humor: chauvinism undercut by irony and self-mockery, the fear of losing cultural identity through assimilation, the importance of vocal inflection in joke-telling, and calls to communal memory, including the use of Yiddish. Above all, come ready to laugh a lot.

Host, "Forum"; Author, Let There Be Laughter: A Treasury of Great Jewish Humor and What It Means

In conversation with Peter Coyote 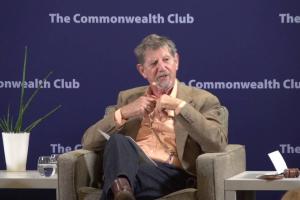 KQED’s Michael Krasny: Oy, Does He Have Jokes for You