In 2013, Antonio Villaraigosa finished his two terms as mayor of Los Angeles, a city of nearly 4 million residents, after eight years of major strides in transportation, crime reduction, infrastructure, energy and resource sustainability, "right-sizing" government, business development and education reform. Before his time in the mayor's office, he served as an L.A. city council member and speaker of the California Assembly. He has more than 20 years of leadership experience at the highest levels of state and municipal government, as well as in business, political, educational and nonprofit organizations.

What’s next for one of California’s biggest political stars? He passed on making a Senate run this year, saying his heart and his family belongs in California. Will he be one of the candidates running for governor in 2018? Come and bring your questions! 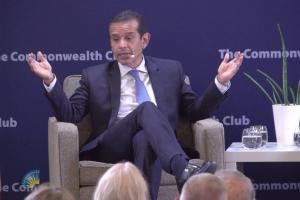