Drawing on his nearly 10 years with Fox News, 10 years as senior national correspondent for NPR, and more than 20 years at the Washington Post, Juan Williams knows the American political landscape. Here’s a chance to get his unfiltered views on Republicans, Democrats, media, race relations and the country as a whole. Related to his new book, he’ll also give his take on what the Founding Fathers and such notables as Ronald Reagan, Eleanor Roosevelt, Thurgood Marshall, Martin Luther King and Betty Friedan would think of America today. Williams will discuss how each of these modern-day founders has extended the Founding Fathers' original vision and changed fundamental aspects of our country, from immigration to the role of American labor in the economy, from modern police strategies to the importance of religion in today’s political discourse.

Williams has interviewed numerous influential people and presidents over the course of his career, including presidents Obama, Clinton, Reagan, and both Bushes. A recipient of several awards for his writing and investigative journalism, he also won an Emmy Award for television documentary writing and has received widespread critical acclaim for a series of documentaries, including: "Politics: The New Black Power" and "A. Phillip Randolph: For Jobs and Freedom." Additionally, he is the author of six books, including the non-fiction bestseller Eyes on the Prize: America's Civil Rights Years, 1954-1965 and Thurgood Marshall: American Revolutionary.

Political Analyst, Fox News Channel; Author, We the People: The Modern-Day Figures Who Have Reshaped and Affirmed the Founding Fathers’ Vision of America; Twitter @TheJuanWilliams

In conversation with Doug Sovern 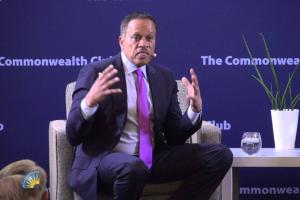