Michael Waldman: The Fight to Vote

Previously, Michael Waldman traced the ongoing argument on gun rights from The Bill of Rights to the current day. Now, in The Fight to Vote, Waldman takes a succinct and comprehensive look at an even more crucial struggle: the past and present effort to define and defend government based on “the consent of the governed.” From the writing of the Constitution, and at every step along the way, as Americans sought the right, others have fought to stop them. This is the first book to trace the entire story from the Founders’ debates to today’s restrictions: gerrymandering, voter ID laws, the flood of money unleashed by the nonprofit Citizens United, making voting difficult for the elderly, the poor and the young, by restricting open polling places.

Waldman describes the precedents for these contemporary arguments. The fight, sometimes vicious, has always been at the center of American politics: from counting slaves but not permitting them to vote, to property-less males, then to free blacks, women, 18-year-olds, and the disadvantaged who were harassed by literacy tests. Now the right to vote is challenged by restrictions on open polling schedules and IDs, plus floods of money. The Fight to Vote, meticulously researched and thoroughly compelling, recounts the ongoing struggle for this right. 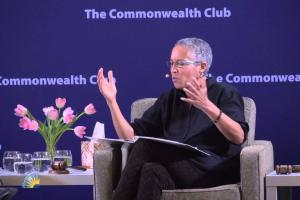 Michael Waldman: The Fight to Vote