Digital technology was supposed to usher in a new age of distributed prosperity, but many have complained that so far it has been used to put industrial capitalism on steroids. Rushkoff says It’s not technology’s fault; but instead he blames a growth-driven, economic operating system that has reached the limits of its ability to serve anyone, rich or poor, human or corporate. But he says there must be a better response to the lopsided returns of the digital economy than to throw rocks at the shuttle buses carrying Google employees to their jobs, as protesters did in December 2013.

Acclaimed media scholar and technology author Douglas Rushkoff calls for people to embrace the more distributed possibilities of these technology platforms. He says we can optimize every aspect of the economy—from central currency and debt to corporations and labor—to create sustainable prosperity for business and people alike. 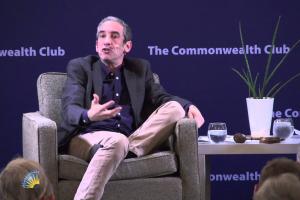