General Hayden presents an unprecedented high-level master narrative of America's intelligence wars, from the only person ever to helm both the CIA and the NSA, at a time of extreme new threats and wrenching change.

For Hayden, playing to the edge means playing so close to the line that you get chalk dust on your cleats. By playing back, you might protect yourself, but he believes you will be less successful in protecting America. "Play to the edge" was Hayden's guiding principle when he ran the National Security Agency, and it remained so when he ran the CIA. In his view, many shortsighted and uninformed people are quick to criticize, but he offers an unapologetic insider's look told from the perspective of the people who faced awesome responsibilities head on, in the moment.

How did American intelligence respond to terrorism, a major war and the most sweeping technological revolution in the last 500 years? What was the NSA before 9/11 and how did it change in its aftermath? Why did the NSA begin the controversial terrorist surveillance program that included the acquisition of domestic phone records? What else was set in motion during this period that formed the backdrop for the infamous Snowden revelations in 2013?

Join us for a behind-the-scenes look at America's anti-terror efforts. 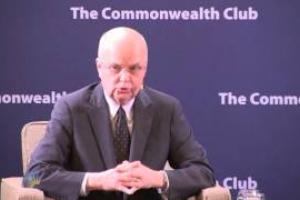