Stephen F. Cohen: The Ukrainian Crisis - It's not All Putin's Fault

The consensus view in Washington and in the U.S. mainstream media is that the Ukrainian crisis, which some have called the worst international crisis of our time, is due solely to Russian aggression under President Vladimir Putin. Stephen F. Cohen’s view, on the other hand, is that U.S. policy since the 1990s is largely responsible, and that unless this is acknowledged at least in part by Washington, no successful negotiated end to the crisis will be possible.

Professor Cohen’s Soviet Fates and Lost Alternatives: From Stalinism to the New Cold War and his The Victims Return: Survivors of the Gulag after Stalin are now in paperback. Come hear the provocative views of this influential and noted Russian scholar. 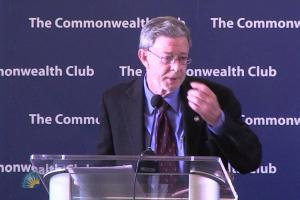 Stephen F. Cohen: The Ukrainian Crisis - It's not All Putin's Fault