Climate change affects many aspects of life and sectors of the economy in the United States. As part of his Climate Action Plan, in early 2014 President Obama called for a review of the U.S. energy infrastructure—our electrical grid, power plants and other systems that deliver energy from producers to consumers. The review, released this April, identified numerous challenges for the U.S. energy sector, ranging from lack of investment in infrastructure to risks from extreme weather and climate change. The report argues that climate change both requires a major reduction in greenhouse gases produced by the energy sector, and it also affects the energy infrastructure through sea-level rise, thawing permafrost and increases in weather extremes.

Deputy Energy Secretary Sherwood Randall will discuss the Department of Energy’s diverse initiatives to strengthen and protect the nation's energy infrastructure, and how the department partners with the private sector to support shared resiliency goals.

Dr. Sherwood-Randall, a California native, has served as second in command at the U.S. Energy Department since October 2014. She joined the Obama administration on day one, serving from 2009 to 2013 as special assistant to the president and senior director for European affairs at the National Security Council, and from 2013 to 2014 as White House coordinator for defense policy, countering weapons of mass destruction and working on arms control efforts. Before joining President Obama’s team, Dr. Sherwood Randall worked at Stanford University, Harvard University and the Council on Foreign Relations. In the Clinton administration, she served as deputy assistant secretary of defense for Russia, Ukraine and Eurasia from 1994 to 1996. Dr. Sherwood Randall attended college at Harvard and then went on to graduate school at Oxford University, where she was among the very early ranks of female Rhodes Scholars. She began her career working for then-Senator Joe Biden as his chief advisor on foreign and defense policy. 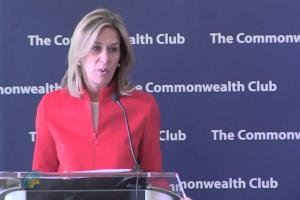