Join Cleese as he takes us on a grand tour of his ascent in the entertainment world, from his humble beginnings in a sleepy English town to the pinnacle of comedy and worldwide success.

With his signature characters – the Minister of Silly Walks and the owner (and would-be returner) of a dead parrot – Cleese's work with Monty Python’s Flying Circus and Fawlty Towers has become legendary. His hit films Monty Python and the Holy Grail, Life of Brian and A Fish Called Wanda, and his memorable roles in James Bond and Shrek have put him in a class of his own. From his hilarious tweets and new memoir, hear more from this towering comedic genius. 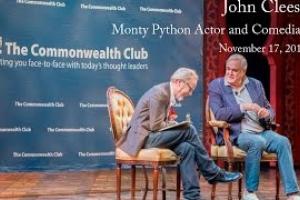