Van Jones & John Hope Bryant: How the Poor Can Save Capitalism

"There is a difference between being broke and being poor; being broke is a temporary economic situation, but being poor is a disabling frame of mind.” —John Hope Bryant

Van Jones will talk with Bryant about his work as founder of Operation HOPE. Bryant plans to revive the American economy by building financial dignity and empowerment for the “teetering class” to rise out of poverty, while reigniting Dr. Martin Luther King Jr.’s "Poor People’s Campaign” for economic justice.

Van Jones is the president and co-founder of Rebuild the Dream, a platform for people-powered innovations to help fix the U.S. economy. He has also written two New York Times best sellers about the green economy and progressive politics.

John Hope Bryant was raised in Compton and South Central Los Angeles and has tirelessly promoted the virtues of hope, self-esteem, empowerment and opportunity for all. He has received more than 500 awards and citations for his work to empower low-wealth communities and has been an advisor to the last three sitting U.S. presidents. Bryant’s new book is How the Poor Can Save Capitalism: Rebuilding the Path to the Middle Class. 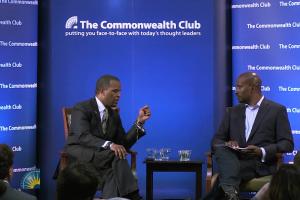 Van Jones & John Hope Bryant: How the Poor Can Save Capitalism