For the last 25 years, Sunday night at 8 p.m. on C-SPAN has been appointment television for many Americans. During that time, host Brian Lamb has invited people to his Capitol Hill studio for hour-long conversations about contemporary society and history. In today’s sound-bite culture, that hour remains one of television’s last vestiges of in-depth, civil conversation.

First came C-SPAN’s “Booknotes” in 1989, which by the time it ended in December 2004, was the longest-running author-interview program in American broadcast history. In January 2005, C-SPAN embarked on a new chapter with the launch of “Q&A.” Again, one hour of uninterrupted conversation, but the focus was expanded to include documentary filmmakers, entrepreneurs, social workers, political leaders and just about anyone with a story to tell.

To mark this anniversary, Lamb and his team at C-SPAN have assembled Sundays at Eight, a collection of the best unpublished interviews and stories from the last 25 years. Told in the series’ signature conversational manner, these stories come to life again on the page. Sundays at Eight is not merely a token for fans of C-SPAN’s interview programs, but a collection of significant stories that have helped us understand the world for a quarter-century. 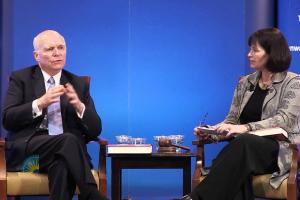