Jeremy Rifkin: Are We Moving from a Capitalist to a Collaborative Economy?

Economist and New York Times best-selling author Jeremy Rifkin will be here to discuss his provocative new book, The Zero Marginal Cost Society, in which he describes how the emerging "Internet of Things" is transforming us into an era of nearly free goods and services and no longer subject to market forces. Rifkin, who is known globally for his work observing the impact of scientific and technological changes on the economy, society and the environment, theorizes that while capitalism will always be an intrinsic part of our economy, it will lose its position as the dominant economic paradigm later in the century. 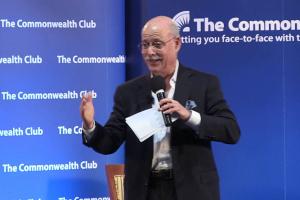 Jeremy Rifkin: Are We Moving from a Capitalist to a Collaborative Economy? (4/9/14)