Get the behind-the-scenes scoop on “Downton Abbey” and PBS’ "Masterpiece" series from the executive producer who has made it a hit for nearly 30 years. Eaton’s credits include "Downton Abbey," "Prime Suspect," "Bleak House," "The Lost Prince," "Miss Marple," "Inspector Morse," "Cranford," "The Complete Jane Austen," "Little Dorrit," "Sherlock" and the remake of "Upstairs Downstairs," along with such films as Jane Austen's Persuasion and Mrs. Brown, starring Dame Judi Dench. Eaton's honors include 44 Primetime Emmy Awards, 15 Peabody Awards, 4 Golden Globes, and two Academy Award nominations. Queen Elizabeth II has honored her with an honorary OBE (Officer, Order of the British Empire) and in 2011, she was one of Time Magazine's "100 Most Influential People in the World.” 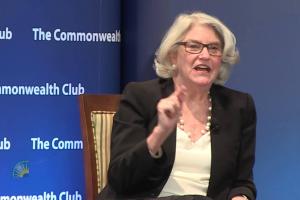