Williams and Mirikitani have been working since 1967 to make Glide Memorial United Methodist Church the spiritual soul of San Francisco, fighting for its poor and disenfranchised. Reverend Williams’s preaching calls for congregants to accept all those around them, including groups traditionally left outside the church door. He is determined to bring real life, in all its forms, into Glide by serving almost one million free meals to the homeless every year and through more unorthodox ideas, such as HIV-testing during services. In his book Beyond the Possible: 50 Years of Creating Radical Change in a Community Called Glide, Reverend Williams’s lays out the lessons he’s learned from events, including the civil rights movement, the Harvey Milk assassination and the Patty Hearst kidnapping, and encourages readers to embrace their true selves, accept all those around them, and fully live day to day through social change as worship. 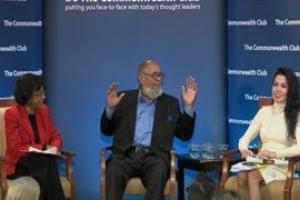