Dylan Ratigan, host of one of the highest rated daytime shows on MSNBC, graces The Commonwealth Club with his hardball, gloves-off approach to American politics and big business. In his first book, Greedy Bastards, Ratigan details what he calls a “broken system” and “illustrates how fixing these problems will release a renaissance of growth and innovation.” Prior to joining MSNBC, Ratigan previously launched CNBC’s highly successful Fast Money and Closing Bell. Come join the debate as Ratigan discusses the repercussions and remedies to the problems we face in America today. 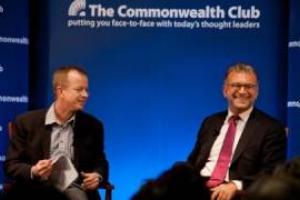