Susan N. Herman, ACLU President: The War On Terror and the Erosion of Democracy

Susan N. Herman: The War on Terror and the Erosion of Democracy

President, ACLU; Author, Taking Liberties: The War on Terror and the Erosion of Democracy

Following the 9/11 attacks, Americans watched as the government implemented numerous pieces of antiterrorist legislation such as the Patriot Act in an effort to fight the war on terror. In recent years, however, many civil rights advocates have increasingly argued that these emergency measures may pry too deeply into the lives of not only suspected terrorists, but of nearly all Americans. ACLU President Herman contends that civil liberties have rapidly eroded in post-9/11 America. She will examine whether laws and policies, like the Patriot Act, are constitutional and effective, or just counterproductive. 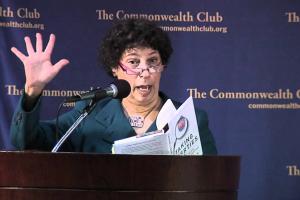 Susan N. Herman, ACLU President: The War On Terror and the Erosion of Democracy (10/5/11)