Rajasvini Bhansali: India Shining - From the Ground Up

India Shining: From the Ground Up

The rhetoric of India Shining, a 2004 public relations campaign, engineered by the then-ruling Hindu fundamentalist party, referred to the economic growth following India's IT boom and a few years of plentiful rain. As India's image as a developed nation grew in the eyes of the global north, it disguised the growing economic, social and cultural disparities in a country where over 400 million people continue to live in extreme poverty. A vibrant civil society and many grassroots movements in India work to deepen democracy and build the power of ordinary people. Bhansali will discuss what has been learned from the ground up from these movements working across sectors, cultures, issues and regions. She will focus on the success of women-led, community-driven initiatives working for long lasting social transformation and discuss the current lgbt movement. 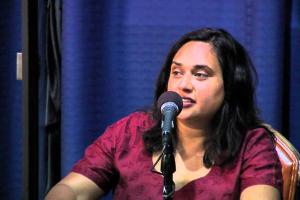