Michelle Rhee and Kevin Johnson: How To Transform American Education

Michelle Rhee and Kevin Johnson: How to Transform American Education

This event is sold out!

Students First is an organization that Rhee calls a “national movement to transform education.”  In her controversial three years as chancellor of the Washington, D.C., school system, she closed nearly two dozen schools, cut administrative positions and proposed that teacher salaries be based on merit rather than tenure. Today, her goal is to “put pressure on elected officials and press for changes in legislation to make things better for kids.” Sacramento Mayor Johnson says he’s “committed to identifying ways to strategically drive education reform.” Upon retiring from the NBA after 12 seasons with the Phoenix Suns, Johnson returned to his hometown of Sacramento to serve as the CEO of St. HOPE, a nonprofit community development organization he founded to revitalize inner-city communities. Hear from these two leaders about what can be done to save the American education system. 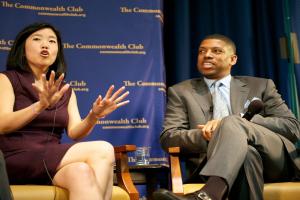 Michelle Rhee and Kevin Johnson: How To Transform American Education (4/20/11)