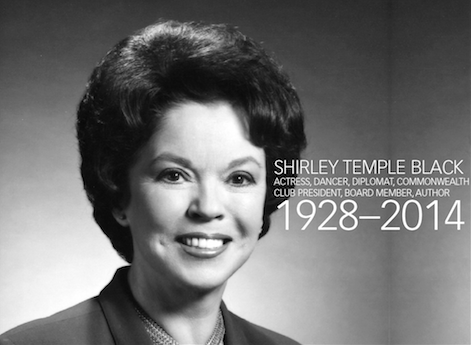 She was also an active and engaged board leader. Concerned at competition between the two organizations, she brokered a written “treaty” between the Club and the World Affairs Council to co-host visiting heads of state, an agreement that remains in force today. Ambassador Black’s most central goal as the Club’s president, publicly announced as her one-year term began in 1984, was to obtain a building for The Commonwealth Club where many of its public forums could take place. She was determined that the Club’s eight decades of paying rent come to an end. She appointed the Club’s first formal building committee, asking friends like Stephen Bechtel, Jr., and others she met, including San Francisco businessmen Joe Perelli and Joe Epstein, to serve on the committee or to chair it. Epstein said, “If I hadn’t happened to sit next to her at a dinner, she would not have recruited me for the building committee and I would not have become involved at the Club.” Both men became volunteer leaders at the Club themselves, serving terms as president later on.

At Ambassador Black’s initiative, the Building Committee looked at several buildings as potential homes for the Club. But the committee reluctantly abandoned the search after three years, after pricing San Francisco real estate and concluding that the Club did not have enough funds or fundraising capability to acquire a building.

In 2011 the Club returned to the strategy set out by Ambassador Black, resuming the search for real estate, this time accompanied by a capital fundraising drive. In October of 2012 the Club had raised enough funds to purchase a prime site at 110 The Embarcadero on San Francisco’s waterfront. The Club will soon break ground on this long-desired building project.

Club leaders were surprised and humbled to learn on the morning after Ambassador Black’s death that she had designated the Club’s building project as a recipient of donations in her memory. According to Club President and CEO Gloria Duffy, “this completes the cycle, bringing Ambassador Black’s dream for the Club finally to reality. We are enormously humbled and grateful to her and to her family.” Founded in 1903, The Commonwealth Club of California is the nation’s largest and oldest public affairs forum, with more than 20,000 members.