Bestselling author AJ Baime returns to The Commonwealth Club to discuss his biography of Walter F. White, a civil rights leader who often passed for white in order to investigate racist murders. White led a double life: one as a leader of the Harlem Renaissance and the NAACP in the early 20th century, the other as a white newspaperman who covered lynching crimes in the Deep South at the height of racial violence.

Born mixed race, with very fair skin and straight hair, White was able to “pass” for white. He leveraged this ambiguity as a reporter, bringing to light the darkest crimes in America and helping to plant the seeds of the Civil Rights Movement. He was simultaneously a second-class citizen subject to Jim Crow laws at home and a widely respected professional with full access to the white world at work. His life was fraught with internal and external conflict—much like the story of race in America. Starting out as an obscure activist, White became a prominent civil rights leader, but until now a character study of White’s life and career in all its complexity has never been told.

This program is part of The Commonwealth Club's Good Lit series, underwritten by the Bernard Osher Foundation.

In Conversation with Sheryl Davis 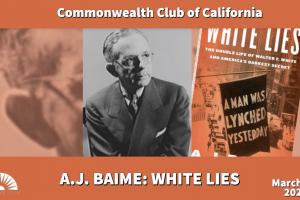