The History and Relevance of Ethnic Studies in a Diverse America

In 1968, San Francisco made history when, as a result of the student strike at San Francisco State University, the country’s first ethnic studies department was born. Over the years, community advocates have continued to find inadequacies in educational programs for students, citing a lack of inclusion of instructional materials for the teaching of history and culture regarding diverse population demographics. They also believe the learning and understanding of diverse cultures will help foster understanding and mutual respect between and among people from different ethnic backgrounds.

Join us for an in-depth discussion with panelists who will discuss their personal stories about the origins of ethnic studies and their individual advocacy within the movement. Learn how and why they have devoted their efforts to advocate for the programs and hear their visions about how ethnic studies can shape our society’s future.

This is one of an occasional series sharing perspectives on the subject of ethnic studies.

Ana De Almeida Amaral is a student activist at Stanford University studying comparative studies in race and ethnicity with a double major in political science. Her passion for liberatory education began as a 10th grader, when she co-founded and taught the first ethnic studies class at her school. Since then, Amaral has dedicated herself to creating an empowering education for all students. She has designed professional development seminars with her organizing partner, Izadora McGawley, to train educators on integrating ethnic studies into classrooms across the country. They have shared their work with educators around the world, presented their advocacy with the Mindset Scholars Network at the Bill and Melinda Gates Foundation, and had their work featured in Forbes magazine. Amaral now works as an advocate at the National Equity Project.

Artnelson Concordia was born and raised in the Echo Park neighborhood of Los Angeles (Tongva land). He is the son of working-class, Filipino immigrants. Artnelson is the father of four brown boys and is in cahoots with his wife to raise them to have deep knowledge and love of self and community, as well as to be active disrupters of the white supremacist, patriarchal, hetero-normative, imperialist hegemony. Artnelson is a long-time educator and was a founding teacher of the SFUSD Ethnic Studies program that was the focus of a 2014 Stanford study that highlighted the academic benefits of the district’s 9th grade ethnic studies class. Currently, he coordinates Santa Barbara Unified School District's (SBUSD) ethnic studies program.

Taunya Jaco, a 6th grade ELA/social studies teacher in San Jose, serves as a member of the National Education Association (NEA) Board of Directors, secretary for the NEA Black Caucus, and chair of the Civil Rights in Education Committee for the California Teachers Association‘s (CTA) State Council. She recently earned her doctorate of education at San Jose State University, where she conducted an exploratory documentary film study on the development of California’s K-12 Ethnic Studies Model Curriculum.

Theresa Montaño began her teaching career as a middle school para-educator in Northeast Los Angeles. She became a middle and high school social studies classroom teacher and taught for 15 years in Los Angeles and Denver. An active unionist, Montaño was also on the staff of United Teachers Los Angeles (UTLA), where she worked as a professional development specialist and as an area representative for 9 years. She was the first coordinator of UTLA’s Helen Bernstein Professional Development Center. In partnership with LAUSD, she engaged in program and curriculum development for Dial-a-Teacher, Multilingual Teacher Academies, the New Teacher Academy, and SB 1969/CLAD certification. She also served on the Board of Directors, House of Representatives, and CTA State Council. In 2000, she left the UTLA to work as a faculty advisor for the UCLA Teacher Education Program. In 2003, she accepted a position at Cal State Northridge in Chicana/o Studies, in the area of emphasis of education. At CSUN, Theresa teaches courses on Equity and Diversity in Schools, The Chicana/o Child, The Chicana/o Adolescent and Chicano Education. She is an advisor for students enrolled in the Chicano/a Studies Masters’ Program and is a member of CSUN Academic Senate Executive board. Currently, her activist scholarship includes securing ethnic studies as a graduation requirement for California’s students and critical race projects on women of color in educator unions.

Samia Shoman is a California native with Palestinian roots. She has dedicated her career in public education to promoting racial and social justice in the classroom and broader educational organizations she has worked in. She is currently part of a California collaborative leading a Liberated Ethnic Studies Model Curriculum Coalition. As a long time high school social science teacher, with a special love for working with English Learners, her current passion is leading an alternative newcomer program and the implementation of ethnic studies for all ninth graders in her district. Shoman currently serves as the manager of English learner and academic support programs for the San Mateo Union High School District. She is also the co-coordinator of the Middle East Children Alliance’s Teach Palestine project. In addition to her secondary school work, Shoman served as a lecturer in the College of Ethnic Studies Arab and Muslim Ethnicities and Diaspora Program and the Masters of Public Health Program at San Francisco State University. Shoman holds a B.A in political science with a minor in Spanish from UC Davis, an M.A. in education from San Francisco State University, and an Ed.D with a focus on organization and leadership from the University of San Francisco.

Iza McGawley is a nonbinary, Chicane student activist at UC Santa Cruz majoring in critical race and ethnic studies and community studies. At the age of 15, McGawley co-founded the first ethnic studies program at High Tech High. Since then, they have gone on to advocate for the creation of ethnic studies programs everywhere as well as work with teachers, students and communities to implement radical, liberatory pedagogy today. Currently, McGawley is a consultant with the National Equity Project, specializing in uplifting student voices in equity work to make space for young people to lead the way in transforming our education system and world.

Dr. Tintiangco-Cubales is a professor in the College of Ethnic Studies at San Francisco State University. She has worked with students, teachers, schools, and districts throughout the nation, including the San Francisco Unified School District, to co-develop Ethnic Studies, Gender Studies, Social Justice, and Filipino Language curriculum. She co-founded several programs and organizations that have spearheaded the curriculum and pedagogical development of Ethnic Studies including Pin@y Educational Partnerships (PEP) and Community Responsive Education (CRE).

This is a free, online-only program; please pre-register to receive a link to the live-stream event.

Presented in association with the APA Heritage Foundation.

This program is made free thanks to the generous support of Gilead Sciences, Inc.. 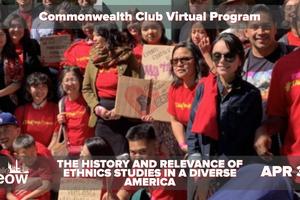 The History and Relevance of Ethnic Studies in a Diverse America

The leading national forum open to all for the impartial discussion of public issues important to the membership, community and nation. The Commonwealth Club of California is the nation's oldest and largest public affairs forum. Each year, we bring nearly 500 events on topics ranging across politics, culture, society and the economy to more than 25,000 members and the public, both in-person and via an extensive online and on-air listenership and viewership.