With the Biden administration taking office, COVID rampant, vaccine disbursement beginning, and businesses and individual Americans reeling from financial burdens, what is the outlook for the economy in 2021? Join us for a lively and important discussion on where the U.S. and global economies are headed and what should be done to keep them on track.

Michael J. Boskin is T. M. Friedman Professor of Economics and Senior Fellow at the Hoover Institution, Stanford University. He is also a research associate at the National Bureau of Economic Research. He served as chairman of the president’s Council of Economic Advisers (CEA) from 1989 to 1993. The independent Council for Excellence in Government rated Dr. Boskin’s CEA one of the five most respected agencies (out of 100) in the federal government. He chaired the highly influential blue-ribbon Commission on the Consumer Price Index, whose report has transformed the way government statistical agencies around the world measure inflation, GDP and productivity.

Laura D’Andrea Tyson is an influential scholar of economics and public policy and an expert on trade and competitiveness who has also served as a presidential adviser. She is a distinguished professor of the Graduate School at the Haas School of Business, University of California, Berkeley. She also chairs the Board of Trustees at UC Berkeley’s Blum Center for Developing Economies, which aims to develop solutions to global poverty. She is the former faculty director of the Berkeley Haas Institute for Business and Social Impact, which she launched in 2013. She served as interim dean of the Haas School from July to December 2018, and served previously as dean from 1998 to 2001. Dr. Tyson was a member of President Clinton’s cabinet between 1993 and 1996. She served as chair of the president’s Council of Economic Advisers from 1993 to 1995 and as director of the White House National Economic Council from 1995 to 1996. She was the first woman to serve in those positions.

Commonwealth Club members receive reduced ticket prices, among other benefits. Not a member? Join today for as little as $10 a month.

This event is underwritten by Bank of America.

This is an online-only program; please pre-register to receive a link to the live-stream event. 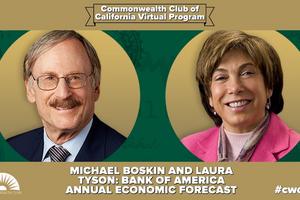