Technology and Race: The Role of Big Tech

Earlier this month, Google fired one of its most prominent Black researchers over an email she sent criticizing the company’s efforts in both hiring a diverse workforce and removing biases that have been built into its artificial intelligence technology. Her dismissal has sparked rage both internally at Google and around the world as yet another example of Big Tech’s failures to adequately address diversity, equity and inclusion. The year 2020 has been a time of reckoning for this country around the impact of systemic racism on the health, safety, mobility and socioeconomic status of Black and brown people in the United States.

While technology has certainly helped jump start movements like Black Lives Matter, critics say it has also played a role in not just amplifying racial tensions but has also actively reinforced systemic racism through the lack of diversity in its creators and the inherent biases within its algorithms themselves. Jim Steyer, CEO and founder of Common Sense Media and author of the book Which Side of History: How Technology Is Reshaping Technology and Our Lives, has devoted a section of the book to exploring just how entangled Silicon Valley has become in our national history of racism and inequality.

In this program, Steyer will be joined by book contributors Ellen Pao, CEO of Project Incude, and Theodore Shaw, director of the Center for Civil Rights at the University of North Carolina School of Law. They will discuss technology’s role in exacerbating racial inequality in the United States and the leadership role Big Tech needs to take in order to move the nation forward. We’ll explore how racial inequality is baked into the very fabric of technological platforms, and how diversity, inclusion and equity might hold the solution to changing its course.

This is an online-only program; pre-register to receive a link to the live-stream event.

In Association with Common Sense Media. 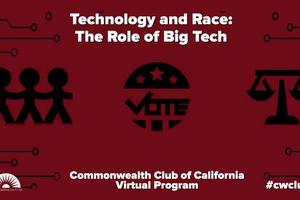 Technology and Race: The Role of Big Tech

The leading national forum open to all for the impartial discussion of public issues important to the membership, community and nation. The Commonwealth Club of California is the nation's oldest and largest public affairs forum. Each year, we bring nearly 500 events on topics ranging across politics, culture, society and the economy to more than 25,000 members and the public, both in-person and via an extensive online and on-air listenership and viewership.