In these increasingly divisive and unstable times, it is more apparent than ever that the health of our democracy depends on educating and empowering young people to participate. But the barriers to their involvement can seem insurmountable: from the lack of civics in schools, indifferent local legislators, and partisan efforts to suppress voting and spark social unrest. Combined, these numerous factors conspire to deny youth the tools and information they need to become involved.

Yet young people have a powerful voice, and they are increasingly using it to challenge all of us to step up, pay attention, and solve pressing social and political issues. In this program, we bring together four youth leaders from across the United States, whose diverse perspectives will provide insights into the experiences of young Americans today. Join us to hear first-hand what it means to grow up during this unique historic moment, to learn about the actions young people are taking to effect meaningful change in their schools and communities, and to consider together what we all must do to empower citizens of all ages, now and for generations to come.

Our student participants are:

A’niya Bankston is a 17-year-old senior at Oakland Technical High School in Oakland, California and youth and civic advocate, author and writer, podcast host, and an aspiring Ob/Gyn doctor. Bankston began her civic advocacy in the 9th grade as a Student Leadership Board member for the civic nonprofit, non-partisan organization Generation Citizen. She later joined iCivics Equity Youth Fellowship, where she helped launch a student-led social media campaign called Youth as Civic Experts, with 11 other fellows. When Bankston isn’t collaborating with her peers, she enjoys recording for her podcast, "What Tea You Sippin w/ Nani B," along with spending time with her family and attending concerts.

Matthew Green is a senior from New Bethlehem, Pennsylvania, and was part of the inaugural Equity in Civics Youth Fellowship class. Green is a technology enthusiast who recently has discovered a love for civic engagement. He is most interested in the role technology plays in politics and our everyday lives.

A native of Boston, Massachusetts, Marcus McNeill is passionate about human rights, environmental justice, advocacy, student voices and civic education. As a junior at Fenway High School in Boston, McNeill is not afraid to dip his toes in the water and try new experiences. His current role as a student advisor to the superintendent of Boston Public Schools allows him to see first-hand how the district is run and also includes advising the superintendent on district policy and ensuring decisions accurately and positively affect the districts' more than 54,000 students. McNeill is also heavily involved in local non-profit organizations across the Commonwealth of Massachusetts.

Viren Mehta is a 10th grader at Oxford Academy in Cypress, California. He was part of the inaugural Equity in Civics Youth Fellowship class. The fellowship was in partnership with iCivics and designed to empower students to address inequities in civic education. Mehta is also a climate change activist, and recently won the National Soapbox Speech Competition and was invited to Washington, D.C., to present his solutions to global warming.

Moriah Balingit, our program moderator, writes about young people and schools for The Washington Post. She started in the newsroom as a graduate student fellow from American University in 2014, earning a master's degree in journalism while covering Virginia schools. Before coming to the Post, she covered crime, city hall and crime in city hall for the Pittsburgh Post-Gazette. She also wrote about former mill towns and juvenile murder convicts, and covered a mass shooting at a psychiatric hospital. While in Pittsburgh, she earned fellowships from the International Center for Journalists and the Pulitzer Center on Crisis Reporting to report on the rise of labor unions in Bangladesh's garment industry and on Nepal's Bhutanese refugees. She grew up in Sacramento, attended the University of Oregon, and interned at The Sacramento Bee and The Oregonian during college

In association with CivXNow, a project of ICivics

This is a free, online-only program 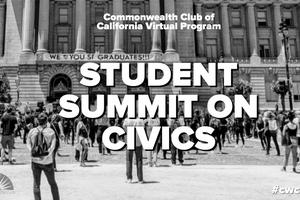