Sir Roger Penrose: What We All Need to Know About Physics

Here’s a chance to meet one of the world’s most renowned scientific thinkers. Sir Roger Penrose, colleague of Stephen Hawking and acclaimed theoretical physicist, will separate fiction from reality when it comes to physics and discuss the fact-based truths of the universe.

In his provocative new book, Penrose argues that fashion, faith, and fantasy, while sometimes productive and even essential in physics, may be leading today's researchers astray in three of the field's most important areas—string theory, quantum mechanics and cosmology. Arguing that string theory has veered away from physical reality by positing six extra hidden dimensions, Penrose cautions that the fashionable nature of a theory can cloud our judgment of its plausibility. In the case of quantum mechanics, its stunning success in explaining the atomic universe has led to an uncritical faith that it must also apply to reasonably massive objects, and Penrose responds with suggestions for possible changes in quantum theory. Turning to cosmology, he argues that most of the current fantastical ideas about the origins of the universe cannot be true, but that an even wilder reality may lie behind them. Penrose even describes how fashion, faith, and fantasy have ironically also shaped his own work.

Come for a discussion that will illuminate physics and its significance to all of us. 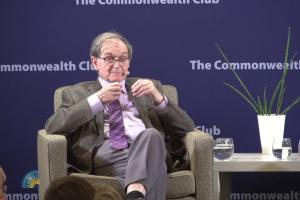 Sir Roger Penrose: What We All Need to Know About Physics