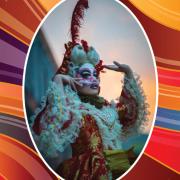 Go To Past Event
from 'Chosen Fam': Behind the Scenes of Panda Dulce's New Web Series held on September 26, 2019

Join us for a discussion of "Chosen Fam," a new web series telling stores of queer people of color in the Bay Area.

Kyle Casey Chu (aka Panda Dulce) is a Drag Queen Story Hour (DQSH) core queen who writes about race, power and desire. Her work has appeared on NPR, Vice, HuffPost, Fusion, MTV, NBC, and them. She has spoken and performed at SFMOMA, RuPaul's Drag Con, and universities across the United States. Most recently, she is the co-writer, lead actress and songwriter of the forthcoming QTPOC web series "Chosen Fam."

Come for a free midday program, as Michelle Meow brings her long-running radio show to The Commonwealth Club one day each week. Meet fascinating—and often controversial—people discussing important issues of interest to the LGBTQ community, and have your questions ready.